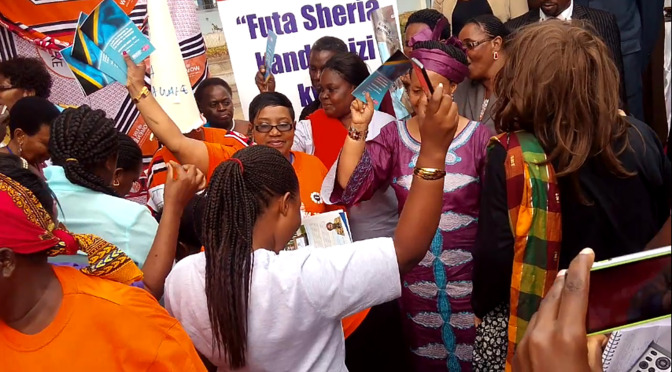 The right to vote is the most important and fundamental in our list of Basic Rights.

Electing public servants into office means we remain with the ownership of all national processes, and our collective decision is what should give legitimacy on Policy; Legislation; Charters.

Those we elect would hold office through our mandate, not through push and shove politicking.

In the modern world voting is the guiding principle and the determining factor of democracy. That is why, for example, free and fair elections have always been emphasized by international standards, to ensure that we exercise democratic right to elect people of our choice, who we deem fit to serve us in public office.

All people who vote in an election are known as the electorate, the general term applied to all the eligible voters in a political democracy. Popularly, democracy is defined as a government of or by the people that is the citizens of a community, a nation.

But obviously all the people, that is the citizens of a community cannot vote for various reasons such as age- for those who have not reached the age of majority, which is 18 years in the United Republic of Tanzania; or because of health reasons, because people with mental illness are not eligible to vote.
However, if a substantial majority of eligible voters participate in the exercise, and if no compulsion or restraint is involved in voting, then that community is considered to have a democratic electorate.

Democracy is defined as a government of or by the people that is the citizens of a nation, women included. Until the 19th century, globally, women were not allowed to vote which is defined as ‘Lack of Universal Suffrage’, which was strongly condemned by Gender Justice Activists who became known as the Suffragettes, and their movement became known as the Suffragist Movement.
It was in the 19th century when the evolution of government in the Western world witnessed the struggle to expand the electorate to include women.
Suffragists like Emily Pankhurst among others, campaigned strongly for women to get the Right to Vote and their struggles paid off when finally, women were able to cast votes which gave them the mandate to participate in the democratic process.

Following the wind of change in enfranchisement women were allowed to vote in the United States in 1920, although women (and men) of African descent were not given this Right in the US, until much later; and in Great Britain in 1928. In Germany, women were enfranchised in 1919 while the Soviet Union (Russia) removed sex restrictions in elections after the Revolution of 1917.

There is evidence which illustrates that the enfranchisement of women was not easy. It was a protracted struggle marshaled by vigilant women to win this Basic Right. For example in Italy and France, the participation of women in the resistance movement against the Germans was an important factor in winning the franchise.

In the then Tanganyika, before the Union with Zanzibar in 1964 to become the United Republic of Tanzania (URT), women got the Right to vote automatically with the Independence of Tanganyika from British Protectorate to a Republic in 1961.

The Universal Declaration of Human Rights states that “all people are equal and are entitled to all basic and human rights without discrimination”.

The right to vote enables people to elect leaders they want. “Women have the right to vote and to be elected into public office,” points out Mary Rusimbi, the Chairperson of the Tanzania Gender Networking Program TGNP.

She is supported by Ms Vicky Mandari, of the Tanzania Women Lawyers’ Association TAWLA who strongly defends the protection of the right to personal integrity; dignity; and the liberty of women in Tanzania.

In an effort to restore and put the status of women on an equal footing with men, what feminist activists call participatory democracy, women need to reflect on the various Election Manifesto propagated by political Parties; understand what are the areas of priority which need to be addressed; and most of all, we need to ask ourselves “What is it that women really want?”

In a nutshell, women want half of everything– from positions of leadership which would include the Voices of Women in the decision making process; to equal pay and employment opportunities; to fully participate in politics in order to gain full representation in decision-making bodies. Women also want the equitable distribution of resources and opportunities, so that all Tanzanians enjoy full Rights; Resources; Security; and Freedoms. This can only be achieved through voting which can be a tool for women to get their rights. The vote is the trump card for women to get the Agendas we want across the drawing boar.

Unfortunately women have been negative in trivial matters including ignorance that if they vote for women at constituency level, the elected women leaders would become forgetful of Women’s Agendas and end up ignoring the very women who voted them into office. “It is an attitude which if they do not overcome it will continue to cost them heavily,” remarks Hadija Abdalla of Tandika in Dar es Salaam.

She adds: “It is high time for women in Tanzania to start reorganizing ourselves to build solidarity and unity among us for our own benefit. And we can only do this by collectively using our right to vote in order to elect leaders, men and women of our choice, whose policies match our Vision of how we would like our nation to be. We should elect leaders of our choice who would champion for, and, defend our rights.”

The right to vote is a yard tick for women to have leaders of their own choice who can defend their rights. “Women and the right to vote and to be voted for into public office, should be taken as a great challenge to women in advancing gender balance and equity,” says Salome Ngonyani.
Lack of confidence among women to contest for representation in decision-making bodies has always been a stumbling block in the advancement of women. For example, very few women contest for parliamentary seats through constituencies. The majority of women politicians prefer to go through the Special Seats mode, which has had the positive impact of getting more women into parliament; or Local Councils, but there has also been a negative backlash which critics of Special Seats have said have “Served to entrench women in a dependency role. It also does not afford women much respect, than if they were to compete for seats at constituency level.

Affirmative Action is necessary if women are to overcome stumbling blocks and to keep pace with men who have had major advantages bestowed on them, in comparison to women. However, as Jane Mbaga says “If Bibi Titi Mohamed could stand on public platforms, before independence, and mobilized the people of the then Tanganyika to support the Uhuru/Independence Initiative, then women should be able to stand for parliamentary seats in current times, specially taking into account, the great leaps Tanzania has made in acquiring Gender Justice”.

In the photo, Mwalimu Julius Kambarage Nyerere on the left, and Bibi Titi Mohamed in the fore, campaigning for Uhuru in Jangwani, Dar es Salaam, 1959

Some activists contend that the advancement of women has been retarded by a general sense of apathy among women politicians after they get into public office, then forget the electorate, and instead, focus on their own personal advancement to break the proverbial glass ceiling. However, some baseline surveys indicate that when women get elected into public office, they literally have to hang there by their teeth, because conditions are not conducive for women to advance up the career ladder even when they do hold public office. The result shows that ‘Women leaders do not care’, when it could be that they do care, but circumstances in their office make them become isolated from the body politic.
This has got to be addressed, so that women leaders do not distance themselves from the female electorate. If they continue with such a stance, women politicians might find they are the butt of criticism and reprisal.

In addition traditional and cultural norms have contributed to disparity between men and women and therefore inequity in all development sectors such as education; employment; health; their participation in decision-making.

Women have to exercise the right to vote from grassroots to national level to elect leaders who would be always conscious of the need to raise women’s status including education and the scrapping of laws which discriminate and deny women of their rights.