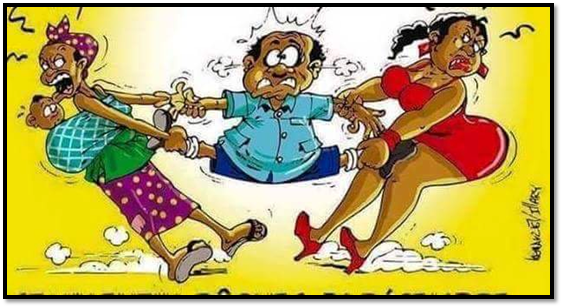 THERE IS NOTHING women dread most than to hear their husbands announce “I’m getting myself a second wife”. Polygamy though tolerated in many ethnic groups in Tanzania, is the stuff that nightmares are made of for the women, not only for the first wife, but the subsequent ones as well!

However, there is a lighter side to ‘the dark deed’ and many a polygamist has lived to rue the day he decided to marry again.

Take for instance Juma. After 8 years of marriage to Fatma, he decided to take a second wife. In his eyes, Fatma had grown worn out; with 4 children. Initially, the younger wife Rukia was treated with hostility by Fatma. Juma saw his chance to be King and set off one wife against the other.

The months passed, with fireworks daily, each wife trying to outdo the other in seeing to Juma’s comfort. However, the time Juma went to Tanga on business saw changes in the household. The two women got on speaking terms and by the time he came back a month later, the two wives had allied against him.

Fatma and Rukia beat up Juma when he came back without presents .He took to crouching behind the house whenever he saw one approaching. In the end, he had to flee town. The last we heard of him, he was seen in Tabora, constantly glancing over his shoulder, and generally, behaving in a furtive manner. He is still afraid of them.

Or my uncle Hussein, who married 4 women, the last two wives, within weeks of the two weddings. He tried to keep to Islam’s precepts by treating all 4 equally. That included material comfort as well as conjugal bliss.

He died of a heart attack on his 50th birthday with a leer on his face, and bitterness in his heart. The wives had discovered him for a fraud, having told each one of them “You are my favorite”, and hastened him to his death with their demands.

My friend Jane’s husband got a shock when he came back from his ‘second honeymoon’. She had burnt all his clothes and spent all their savings on gold ornaments. When the new wife discovered that the house he had promised her was not going to be built, she disappeared, with the gas cooker; fridge; TV set; and car.

There are some husbands whose wives deliberately encourage them to take second wives. Like Ali who is such a whiner, that his wife got fed up. She saw her way out of a early grave by mobilizing a second wife to relieve her.

On the surface, it would seem that women are the losers in such set ups, but scratch it, and you would find that in most cases, it is the men who end up in trouble.

The family of Martin in Iringa is so large that he keeps forgetting his children’s names. They now number 16. His job as a clerk does not pay enough to sustain such a large family, while his 3 wives are still competing on having the highest number of children.

The noise of the children; the constant bickering among his wives; poverty; and the generally chaos; have finally gotten into his head- literally! He was recently admitted in a mental health hospital.

Some co wives teach their husbands a lesson in other ways. They dress identically, like Salma and Asha. They even have the same mannerisms. Their husband got so fed up that he once shouted “If I wanted the same type of woman, I wouldn’t have married 2. What I wanted was variety; spice”, he said.

I once knew a couple where the husband decided to take a second wife. His first wife approached the bride to be and recounted all his faults. That he snores in his sleep; is selfish; and is a miser. The girl took fright and fled to Dubai. When he confronted his wife, he called her “Kill Joy”, what a farce!

The oddest match was between a man of 70 and a girl of 22. His first wife laughed at him as he was getting ready to go to his wedding. The old goat strutted before the mirror while combing his wispy hair. At the bride’s house, he was greeted with silence. There was no sign of a wedding. The prospective bride had run away with the groom’s nephew.

Why do some men marry more than one wife? Some Muslim men would argue that it’s because Islam has allowed it, conveniently forgetting that it is not compulsory. In fact, it should be practiced with the utmost discretion.

I once heard a friend, a man; say “All men are polygamous at heart, the only difference being that some men have more courage than others in taking that (frightening) decision”. Other men would argue that their first choice in wife was a mistake. Since they respected their first wives, and had, had children with them, divorce was out of the question. The alternative was to take a second wife and be happy.

A relative of mine once said he did it to relive his youth. The courting stage; the winning over; the courting dance; the excitement of being a groom again; brought back nostalgia. He said he would have been grossly unfair to himself to pass over such a chance. “Oh! To be young again”, he opines.

Feminist sociologists have put forward the notion that men take second; sometimes third wives; in order to prop their flagging egos. They feel insecure; inadequate in their manhood; and think that by having a ‘harem’, they would win the respect of their peers.

Some men marry second wives in order to spite their first wives who constantly disparage and emasculate them (surely they have a reason for nagging?). The men feel the new wives, quite often young women, would look up on them and not give them stinging repartees.

There are those polygamous men who do it to demonstrate their wealth and as a status symbol. Others do it to get work horses. The women farm for them or engage in business for the man’s advantage and prosperity. Others do it because their friends have done so, and most end up unhappy and regretful.

Women on the other hand choose to get into polygamous marriages mainly for financial consideration. The man, having toiled with his first wife for years, should be in a position to afford a comfortable standard of living. He can afford to buy the new wife expensive presents; send her abroad on shopping trips; and maintain her in a luxurious standard he wasn’t able to afford with his first wife when they were younger. Unfortunately, most of these women do it at the expense of the first wife.

It is said that men who practice polygamy do it at their own risk. They risk losing money; the respect of their children; and in extreme circumstances, they risk getting heart attacks. Polygamous households are bound to be stressful with the wives constantly vying for the husband’s attention. The day to day expenses of having polygamous households are often very high, with the cost of living being at an all time high, maintaining two; sometimes three households; requires dexterity.

With all that stress; squabbles; penny pinching; being torn asunder by conflicting interests; we can safely say that “Polygamy does speed men to the grave”.

So there! Men may play musical chairs with women’s feelings, but what could result is a lot worse for the polygamous men. Watch Out!