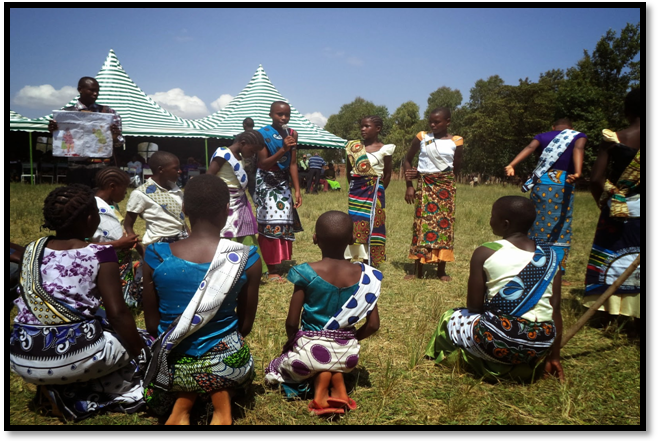 UNYAGO, or puberty rites, was brought to the coast of Tanzania by Ngindo; Manyema; and Nyasa; migrant ethnic groups in the early 19th century but as a practice, was confined to African peoples until the late 19th century when it was adopted by the Swahili coastal community and incorporated in Swahili culture as an important aspect of a girl’s rites de passage.

It is claimed that the word Unyago originates from the word ‘Kinyago’ meaning a wooden carving, and from the research this writer made in Tanga region, respondents who were all women claimed that the ethnic groups which brought Unyago to the coast in the early 19th century were animist, worshiping traditional deities which had been carved and which often represented African female deities of fertility; harvest; the fecundity of the earth in the form of a Mother; rivers and streams; marriage and childbirth; and of the passage of a girl’s life from a child; to an adolescent; to a woman; with each part marked and celebrated with prescribed rites and rituals.

The respondents, who numbered 21, included the Nyakanga, teachers of Unyago, which in modern times we would define as Traditional Sexual and Reproductive Health SRH Education; while some respondents were the Somo who help the Nyakanga in the initiation rites of puberty rites; as well as 3 women who had undergone the rites of initiation, known as Mwari- singular; or Wari-plural. They told this writer that the masks which are worn by the Nyakanga; Somo; and drummers; during the ‘Coming Out Ceremony’ when the new initiates are introduced to society; and to their peers as having undergone initiation and are now reborn; those masks could be the origin of the word Unyago from the word Kinyago. Other respondents claimed the word Unyago could be the name of one of the original groups which started the trend of the initiation rites on the coast, and hence, the word Unyago has been taken as a derivative of the initiation rites.

Whatever its origin, the word Unyago means the entire process which the initiate goes through right from the time of the confinement of the initiate; to the teachings she receives about sexual and reproductive health SRH; to the culmination of the training when the Mwari, the initiate, is brought out and introduced to the women of her community amid song and dance, when she is recognized as a girl who has undergone initiation, an arduous training, and she comes out ‘having been taught’ Kafundwa.

There are two types of Unyago practiced in Tanga. The rombo Unyago which involves teaching about bodily functions like menstruation; chastity; conceiving babies; breast feeding; sex and sexuality; personal hygiene; etiquette; and dance; and the staha unyago during which girls undergoing the initiation are taught on menstruation; cleansing the body with Islamic ritual after menstruation; feminine hygiene; and good manners. During both types of Unyago, the initiates are taught about chastity and to keep away from boys. They are told it is mwiko, taboo to allow a boy to see parts of her body; or to allow a boy/man to touch her body, and that she has to wait until she gets married to engage in sexual contact. This helped in reducing teenage pregnancies and was also a way of avoiding Sexual Transmitted Infections STIs.

Until the 1970s, a girl’s mother would be the subject of ridicule in Tanga if she decides not to send her daughter to Unyago; however, in current times, not all girls in Tanga are sent to be initiated in the Unyago except when a girl is about to get married, when a somo is appointed to train the bride to be on what to expect from a marriage; interpersonal relations with her in laws; and how to take care of her husband and home.

A girl’s first menstrual period is a matter of grave concern to her parents among the coastal Swahili people of Tanga. In the past until 50 years ago, girls would get confined ‘Kutawishwa’ until they got married, but with modernity and opportunity for education, as girls have to attend school and later on, start to work outside the home. Parents’ anxiety has increased because adolescent girls are allowed from freedom nowadays. They meet boys in school; socially at parties or sports; and some even conduct romance with boys.

The onset of a girl’s menstruation aggravates the anxiety parents experience over their daughters’ welfare. Before a girl gets her first menstrual flow, a Somo would have been selected to guide her throughout her life in matters relating to her sexual and reproductive health SRH; her marriage; her children; her prayers; and even in her social interactions. In the advent of a Somo’s death before a girl gets married, another Somo is selected to replace the first one. It could be a relative of the first Somo; or a friend who had close links with both the Somo and her Mwari, the girl the Somo is guiding and training, one who would know the level of training the Mwari or Initiate has acquired, and continue from there. Seldom is an adolescent girl left to her own devices.

The role Unyago could play in HIV Intervention

There are various aspects of Unyago which are still relevant in current modernity and which need to be passed on to the next generations. For example, the emphasis on good manners; cleanliness and hygiene; hard work; resourcefulness; and abstention from adolescent sex are all important points to consider in the upbringing of adolescent girls.

Most parents with whom I have conversations have confessed that they find it difficult to discuss sexual and reproductive health SRH with their adolescent children, and keep hoping that SRH would be taught to their children in school. On the other hand, our national school curricula has not included SRH as a focused subject to be taught like geography and history, but is taught in biology class, skimming through the details without much emphasis on SRH.