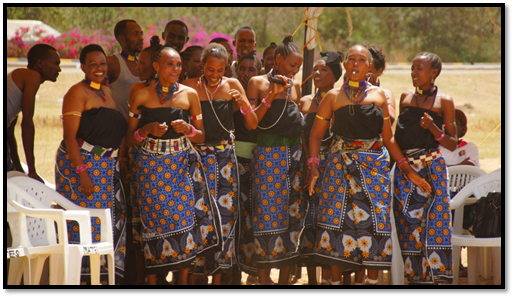 SONG AND DANCE are two mediums of communication that women have used the world over as a way of expression. Indeed, the poetry of movement; the lyrics; the lilting melodies of many of our songs have been perfect vehicles for putting together our thoughts; aspirations; triumphs; sadness; displeasure; and love. Through song and dance, women get power over their bodies; thoughts; movements; and their independence of spirit.

In ancient times, before the advent of foreign cultural influences, women in Africa were proud of their bodies. They would adorn their bodies with ochre; oils; ornaments like beads; skin; feathers; and colored stones; and they swayed their bodies according to the rhythm of their feelings. The concept of too fat; or too skinny; or too dark; never entered their minds because all women were deemed to be beautiful. At that time, a woman’s body was considered beautiful; rich in rhythms and mysterious language.

Until the outsiders came and brought with them strange notions that a woman’s body ought to be repressed; and that it is an instrument of evil; luring men to commit sin. When that happened, an obscene modesty was perpetrated and women’s bodies came to be described as vehicles for the devil’s work; or gross and ugly. Women started to feel ashamed of their jiggling flesh and started to despise their beauty by taking up foreign standards and conception of beauty.

In recent times, traditional song and dance has been hijacked by men. The men choreograph the dances and change the lyrics of the song, and the beat of the drum, and turn them into cabaret shows that bear no relation to the original purpose, that of celebrating life.

The dances have now become caricatures of what is offered in Western nightclubs where women sing and dance not for their own happiness and self-expression, but they do it to titillate men. Dance is no longer a celebration of womanhood, but a means of displaying women as sexual objects. The time has come for women to reclaim their bodies; their rhythm; and their space.

No wonder many parents discourage their daughters from participating in school dance concerts after seeing the way our traditional dances have been mutilated.

Women who dance the kibao kata; the dumbak; or chakacha; have come under attack for breaking the taboo of bringing out to the public the dances which were traditionally confined in women’s spaces, to spaces which are under the control of men. Detractors point out that such dances belong in women’s spaces and should not be brought out to be made a mockery. In such spaces, women could let down their hair. They could dance with abandon. They could use emotive gestures to communicate their lives’ experience. Now that such dance spaces have been taken away from women, the dances have become a window of voyeurism by men. The dances have lost their magic and original charm.

Traditionally, there were dances which included both men and women together but the styles were different, and so were the songs. Now the women owned dances have been taken to male dominated spaces and women no longer own the poetry; the music; the rhythm; the movements; or the ethos of the dances, that of women’s self expression and independence. What happens is, men watch the women dancing and pass ribald comments which are offensive to the original spirit of the dances.

From there, some parents have moved to the other extreme, that of undermining the rights of girls to song; dance; and poetry. When a little girl moves with abandon during games, she is chastised and told to ‘hold herself together’. She is told that women are supposed to be submissive. That the body she is using for sports does not belong to her, but would one day belong to her husband to do with as he pleases.

From there, the repressive process begins. Instead of standing proud and upright, a little girl is taught to bow and look down. Her spine takes on a curvature, symbolic of her life.

She no longer walks with strong strides. Instead, she shuffles. Instead of being told that a woman’s body is beautiful, she is told that her body is just a means of ensnaring a husband and for having his babies.

Her anklets and bracelets no longer tinkle to the rhythm of freedom. Her footsteps move with the weight of oppression. Her back is bent, even as a little girl. She looks down and she holds in her shoulders lest society says “She is aggressive”. She has become a prisoner of her destiny, that of being a woman. She sometimes watches the birds flying higher; and higher; and higher; and wishes she had wings to fly with. She cannot articulate that her wings have been clipped but if she tried hard enough, she could sprout new wings and fly high like the birds.

However, all is not lost. All terms of imprisonment must inevitably end. That time is nigh.

Let little girls blossom into powerful women. Let us teach them to fly to the ceiling; break that ceiling and soar, soar high in the sky.

Move that body. Believe that you are a free spirit. Beat that drum and sing to a high crescendo. Sing. A song a day keeps depression away. You can, and should have control over your life. That is reason enough to Rejoice!