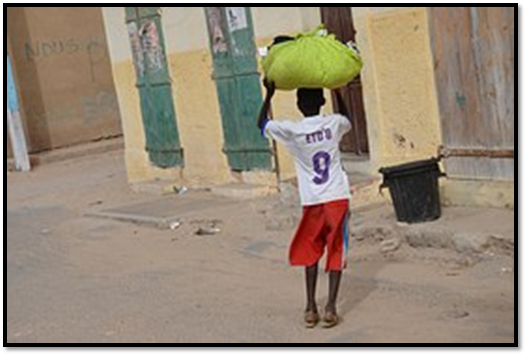 DOMESTIC WORKERS are the least respected and least exposed working group of women though their contribution to the economy is substantial.  Though they are in the periphery as a labor force, they enable professional women to have the time to engage in practical pursuits to further their careers.

They are the ones who spend more working hours with our offspring to the extent that they have a certain degree of influence on children’s upbringing and in shaping their mental growth.  However, rarely have we heard of a house girl making a success of her ‘career.’  As one person put it succinctly “Once a house girl, always a house girl.” On the whole house girls either continue working as ‘house girls’ for the rest of their lives having no upward mobility.

Those who are ‘lucky’ enough change jobs to get employment in bars under more or less the same terms as they used to get as ‘house girls.”  In a random survey conducted by this writer, 65 per cent of the domestic workers said they were aspiring to get jobs in bars.  For them it was a step up on the social ladder.

It should be noted that finding jobs is not difficult.  The difficulty arises when employer or prospective domestic worker discuss terms of employment.  The employers are often not well off but have to employ domestic workers to take care of their houses and children to enable them (employers) to work outside the home and earn salaries.  Why are the domestic workers not protected by the Employment Act?

But most domestic workers are not paid the minimum wage!   This is because of the prevailing circumstances.  If an employer earns, for example 250,000/= a month in her job, she can hardly afford to pay the minimum wage of 40,000/= (The minimum wage has been increased).  So what they do is to offer the girls about 30,000/= and pledge free board and lodgings.  The girls agree to the wages as many of them are naïve and think that 30,000/= is a lot of money.  By the time they become aware of the cost of living in big towns, it is too late to bargain for a rise.  Some of them put up with it, while others leave – often without notice – to seek employment elsewhere.

In 1972 a law was passed.  The law stated that all workers should work not more than 45 hours a week.  Domestic workers were excluded.  They are supposed to work 9 hours a day for 6 days a week.  This means they have to work 48 hours a week with a day off.  And although the maternity leave Act of paid maternity leave for 84 days for all women workers regardless of marital status also included domestic workers it is not applicable to them.  Why are these labor laws not effective to domestic workers?

It is understood the family relationship has often been put to use in order to give low wages or no wages at all to those domestic workers who are even remotely related to her employing family.  And out of fear of dismissal or out of family loyalty quite often domestic workers vehemently protect their employers.  As a result labor officers or trade union representatives cannot do much to improve their situation.

If you ask an employer what his or her house girl does, you would be told that the house girl is just a helper, meaning she just assists in the mundane chores whereas in reality, she takes on the burden of the heaviest work at home.  Cleaning, washing clothes, cooking, shopping and minding small children and sometimes farming on vegetable patches or taking care of poultry units.  This is not helping.

It is actually working.  House girls encounter occupational hazards, out of 50 domestic workers interviewed, 25 had sustained injuries while on duty.  Of these 10 had got burnt by hot oil, hot water, charcoal stoves and food while cooking.

According to the survey about five domestic workers said they had got fungus in their feet from tending the household animals.  One got bitten by a dog, one got tossed by a cow while trying to move it to a better grazing place and one got bitten by a snake while collecting charcoal from the store.

Over 80 per cent said they suffered from chronic malaria because the places they sleep do not have mosquito gauze while six said they got bronchitis from sleeping on bare floors.

Some employers have physically battered their domestic workers.  This barbaric habit has been applied especially to very young girls who do not have relatives in the city and were obtained by the employer directly from villages.

Out of the 50 workers in the survey, five had experienced physical abuse from their employing family.  Out of these one got beaten because she had fed milk mixed with cold water to the baby and the baby got diarrhea.  Two got slapped for staying out late at night on their Sundays off after saying they were going to church and would be back by 3 p.m.  One got slapped by the older boy in the family for burning his shirt and one got slapped because she had let in two strange men into the house after being explicitly told not to open the door to strange men as they could be burglars.  Fifteen of the 50 said they experience constant insults and abusive language from their employers and their families.

The list of incidents of violence against domestic workers is also endless.

Twelve of the 50 domestic workers interviewed said they have had sexual overtures from the men in the employing family.   These were either husbands, brothers, sons, nephews, fathers-in-law, brothers-in-law or uncles of the employer.  The rest said they were not aware of any sexual undercurrents in their dealings with the male members of their employing family.  According to the survey out of the 12 who had propositions, seven succumbed and had sexual relations; the rest reported the incidents to the women employers who reacted in different ways.  Two got sacked, one got protection from the woman of the household, two got mild interest which later died down and they are still being harassed sexually.  Of those who succumbed and had sexual relations with member of the family six got sacked when the employers found out.

Eleven of the women in the sample were married.  Twenty have live-in-lovers.  Eight have not started sexual relations and the rest carry on and off relations with men.  Over 50 per cent have children who either stay in the villages of the domestic workers with relatives or live with their mothers in the city in rented rooms.  Nearly 40 per cent live with their employers and sleep either in the kitchen or share rooms with children.  Women with children and husbands complained that they did not have enough time for their families or their own homes.

Without exception, all the employers interviewed complained about laxity and lack of loyalty from their domestic workers.  They said their workers make their lives difficult by disobeying orders, leaving houses dirty, not taking care of children properly, one employer said one day she came home unexpectedly and found her two children – a four year old toddler and a nine month baby – all alone.  Her worker had gone to have her hair plaited.

Another claimed that her worker dropped the baby which fractured its skull.  At least ten of the employers said they had caught their workers stealing from them, mostly money by giving back the wrong change.  Twenty said their workers were imaginative liars inventing excuses for everything.

The claims of the employers are endless.  From the survey, it appears both domestic workers and employers have complaints against each other and all of them had not come up with any solution to solve the resentment on both sides except for termination of employment.  And as long as there are no crèches and day care centers established at places of work throughout the country, there will always be a market for domestic workers and this knowledge gives the domestic workers a degree of power over their employers, especially those with small children who need constant minding.

Because employers are always seen in the role of the oppressor and the domestic worker in the role of the oppressed and the exploited by the latter, there will certainly be a degree of insecurity, resentment and lack of trust on both sides.  The employer feels insecure because her worker can leave at short notice and she will be left with the baby/toddlers to mind while her work in the office/factory is waiting for her.  She also feels insecure when she leaves her small children with a cruel domestic worker.

On the other hand the domestic worker feels insecure because lacking knowledge of her rights, she can be dismissed without benefits and until she can find another job she would probably have nowhere to sleep.  She also feels resentful that her employer gets to work away from home, meets interesting people and gets a better salary; sometimes the employer drives a car, while she is just a dogs-body, without hope for advancement.

What then will be the best solution for both sides? Given proper incentives domestic workers can be made to be productive.  The survey mentions an employer who opened a savings account for her domestic worker and taught her sewing.  The domestic worker now works as a tailor in her employer’s shop and if she is smart she may open her own shop in the future.  Therefore it would be humane to have such schemes in mind when employing domestic workers.

It is the feeling of boredom, the feeling that there is no hope for advancement which makes domestic workers resentful and lazy.  But given proper incentive, as has been said, domestic workers can be made to be productive.  After all, they are the ones who enable us to further our careers.

They take on the traditional role of wives while we take on roles of husbands, especially in single parent families and if we mistreat them, we would be acting like male chauvinists who deny their wives chances to advances themselves up the social ladder, to socialize with friends and neighbors and to fight off depression.