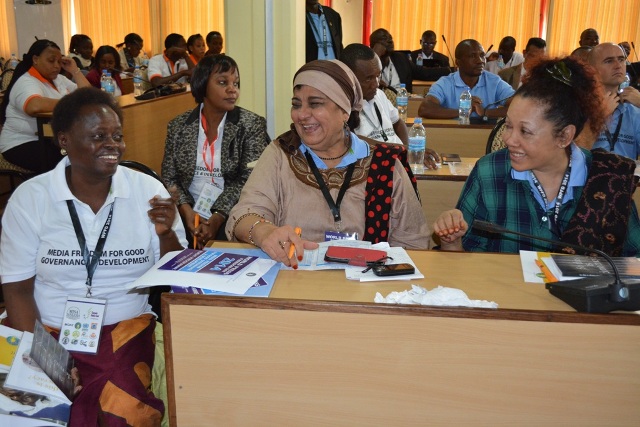 Women Human Rights Defenders (WHRD) tend to be invisible and their safety is never taken in account in Tanzania, yet, we, the women human rights defenders exist and we often put our safety and sometimes, our lives at stake when we stand on the frontline to defend human rights and social justice, not knowing when the stone will get thrown at us, or from which side the stone will come from.

This year, 2015, marked the 104th International Women’s Day (IWD), the first time the IWD was commemorated was in 1911 by the Suffrage Movement which fought, cajoled, lobbied and finally got the Right to Vote for women, and as we mark the 20th Beijing Platform of Action on Women’s Rights, there is need to ponder, and then adopt our own Resolutions in Tanzania, and come up with a Plan of Action to Defend the Defenders!

Here, are a few anecdotes and some scary incidents from the diary of a Women Human Rights Defender:
1990 we started  speaking up and raising our voices from the platform of the Tanzania Media Women’s Association, TAMWA, against domestic violence. We did this through the mainstream media in the form of focus features and in focus issues of CSO newsletters. The society, sadly to say, even a section of women came out with strong and denigrating statements and called some of us, who were very young then, ‘frustrated, ugly, man hating females’. Ouch! That hurt, a lot!
No one, women especially, wants to be called frustrated, ugly, man hating females.
We did not give up but went ahead by starting a Crisis Center – TAMWA, for survivors of Intimate Partner Violence. That one center in Magomeni, Dar es Salaam was a precursor for another 25 Crisis Centers which were started in other regions in mainland Tanzania.
After this writer and defender had written a focus feature on domestic violence with testimonies from survivors which was published in the Sunday News, Tanzania, there started a ‘war’ of words from the public through the Letters to the Editor Forum in the Sunday News, which called this writer a frustrated cow, and that her husband should learn to control her.
Following this, I was attacked by an unknown assailant along Samora Avenue in Dar es Salaam who hit me with his briefcase. He had aimed at my head but someone from a shop had called out to me that a man with a briefcase was stalking me and had raised it to hit me on the head, and I managed to duck and instead, got hit on my left shoulder.
I ran crying to TAMWA offices in nearby Kisutu and someone there, applied ointment on my bruised shoulder.
I didn’t have the guts to inform my husband that I had been attacked for writing on domestic violence but he saw the bruise and asked if I had been attacked and I said “a mad man in Samora Avenue had hit me with a briefcase”. Phew!

By 1993, we had raised our voices against sexual violence, first by focusing on child sexual abuse and then on rape and sexual harassment which was being perpetrated against adult women.
That is when a large section of society, started calling us “frigid, frustrated, ugly women”, while a small section of men said “women enjoy rape”. When we asked about children, they said “it doesn’t happen”, that it is a figment of our imagination.
TAMWA then decided to conduct surveys on child sexual abuse and on rape and sexual harassment. What we learnt from the surveys made us map focused campaigns to be conducted through the media to raise public awareness on sexual violence; the forms it takes; and how to protect children and women from sexual violence.

By 1997,  TAMWA launched a three year program to stop gender based violence. In 1998, we got the Sexual Offences Special Provisions Act (SOSPA1998) which became a huge milestone in our endeavors to reduce, if not stop sexual Offenses. SOSPA was the result of Movement and Coalition building with FEMACT, and with media houses and media practitioners in Tanzania. The Government of Tanzania, Ministry of Justice and Constitutional Affairs worked with us in the Coalition to get SOSPA enacted.

In 2000 we found out about HIV related gender based violence. This included rape and child sexual abuse HIV infections;  to Intimate Partner Violence; which went on in a HIV infected couple.
We also started to focus on stigma, discrimination and violence against People Living with HIV and AIDS -PLHIV. The practice was quite widespread within families to places of employment.
CSOs in Tanzania formed Coalitions with Movements and Community Based Groups of PLHIV, and together with the Tanzania Commission for AIDS- TACAIDS,  we designed a program to reduce the stigma and discrimination and violence against PLHIV.

To some extent, we succeeded with the enactment of the National HIV and AIDS Policy 2001, with subsequent amendments in 2010 and the enactment of the National AIDS Act 2008, it became easier to enforce the Rights and Security of PLHIV.
It was not easy but we managed to get PLHIV on the driver’s seat after training them on movement building, lobby and advocacy and now PLHIV are no longer living with the stigma and discrimination which had been prevalent in the 1990s.

Around the same time, the early 2000s, the CSO Movement in Tanzania, led by FEMACT and CHAWATIAT, the women traditional healer’s association, launched a campaign to stop the killing of elderly people, women especially, who are accused of witchcraft practice which is taking place mostly in Shinyanga; Mwanza; Tabora regions in mainland Tanzania.
We also focused on Female Genital Mutilation FGM which made people in several regions of Tanzania hate us for interfering with their traditions.
By 2007, it came to our notice that there is albino mutilation/killing in Tanzania and we raised our voice yet again!
We also started the Feminist Movement Building Initiative under the aegis of FEMACT in order to build a strong feminist movement which would dismantle patriarchy.

This was in 2008. But we also learnt that women in the periphery of the economic circle, especially women in rural communities face the challenge of poverty. This was part of the Transformative Feminist Movement Building – TFMB Study conducted by the Tanzania Gender Networking Program, TGNP in four districts – Kinondoni; Temeke; Ilala; and Mbeya Urban. So economic justice became our focus.
Then we decided that we need to encompass sexual; reproductive; gender; economic; health; political; food; security; water; justice and we came up with Social Justice which encompass all the different aspects of justice.

However, now is the time when I still have the stamina and the strength to ‘find myself’ because while helping others, I seem to have ‘lost myself’ and if I do not take the time to find myself, I might find out that time has passed at the blink of an eyelid and that I cannot
find my  way out of the labyrinth.
So, now I, am re discovering myself and learning to focus on myself instead of trying to carry the problems of all women on my shoulders which is next to impossible.
I find that I quite like myself and I have learnt to take time off from activism every once in a while and take a rest and be me!

The 1950’s saw the emergence of indigenous voices on the political... read more